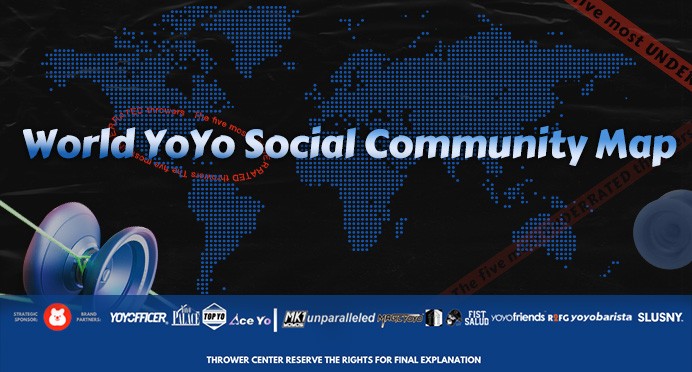 Yo-Yo has been around for almost 100 years since Donald F. Duncan founded Duncan toys in 1930. With the regularisation of the World yoyo contest(WYYC) in the 21st century, yoyo has evolved from a toy to a competitive sport, with professional competition rules, product specifications, and community culture.

However, with the small size of the yoyo community and the difficulty of learning the skills, yoyo players have had to use social media more than any other competitive sport to share ideas, gain information and make friends. Especially with the explosion of covid, offline yoyo events have become more challenging to organize, making yoyo players even more dependent on social media to communicate about yoyo. And for a new yoyo player, there may only be a few or even no one throwing in his city, which can make learning to throw even more complicated, so meeting yoyo players through social media is probably the best way to go.

We have therefore compiled a social media map of the yoyo community covering as much of the world as possible so that yoyo players can find the social media groups they are interested in more efficiently. You are not alone in your throw; yoyo players worldwide are your friends.

There are now communities of different sizes in each country, depending on the development of yoyo in that country, in the form of Facebook groups, forums, or websites. Finding the yoyo community in your country will allow you to find yoyo plays in your country very efficiently.

WYYC, the world’s most prestigious yo-yo competition, is hosted by International Yo-Yo Federation(IYYF). Influenced by covid, the WYYC ceased to be held in 2019 when it ended in Cleveland, USA, and in its place, the WYYC provided the stage for yo-players worldwide at this particular time.
Meanwhile, 44clash is also active as an underground competition, with its ruling rules leaning more towards street artistry. And scales are also staging online tournaments this year and are recognized by the world’s yoyo players.

Asia Pacific Yo-Yo Championships (AP) is Asia’s most renowned and premier yo-yo competition organized by Spinworkx, a company based in Singapore since 2003. The AP has been suspended for two years due to the impact of covid.
The European Yo-Yo Contest is organized by the Czech Yo-Yo Association and the Czech Yo-Yo Shop - SLUSNY and is the most prestigious yo-yo competition in Europe.
As is customary, the winner of the AP and EYYC will be seeded in the semi-finals of that year’s WYYC.

If after buying a professional yoyo you feel it’s not suitable for you, you can sell your yoyo on BST. If you have any yoyo you want that is discontinued or out of stock, you can try to find it through the BST section.

Special thanks to the Trapeze members from THROWER CENTRE.