Who Almost Beat The Sound Hashira To Death?-The Upper Moon Six Gyutaro In The Demon Slayer

Who Almost Beat The Sound Hashira To Death?-The Upper Moon Six Gyutaro In The Demon Slayer One of the main foes in Demon Slayer: Kimetsu no Yaiba’s Entertainment District Arc was Gyutaro. He was a member of the Twelve Kizuki and occupied the rank of Upper-Rank Six, which he shared with his sister Daki.

Before Doma, who was Upper-Rank Six at the time, personally transformed Gyutaro and his sister Daki into demons. He was a human who worked as a debt collector in Yoshiwara’s Rashomon Riverbank, the lowest class in the Entertainment District. At the time. 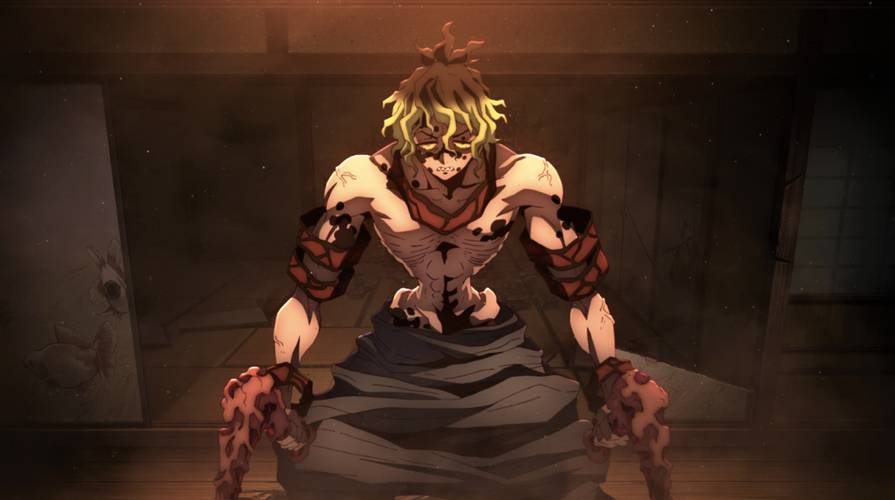 As a demon, Gyutaro was a fairly tall man with a somewhat muscular build and a black-dotted, grayish-peachy complexion. His anatomy was a little peculiar in that his upper torso, arms, and legs were all extremely muscular. At the same time, his waist was incredibly skinny, and his pelvis protruded at an unnatural angle. He had slender, green-and-orange eyes with the characters for “Upper Rank” and “Six” etched across them. His eyes were slanted sharply downward at the sides. Around the crown of his head, his untamed black hair abruptly ends in a brighter green. It is messily fashioned with uneven bangs. Black dots and a flowing water-like pattern can be seen on both his face and body, which are marked with what appears to be ink. Gyutaro is said to have a highly disagreeable appearance.

Gyutaro was dressed in a pair of baggy blue slacks, no shirt, and seven pieces of red-patterned material, three of which were wrapped around each arm and one of which was placed around the neck.

Gyutaro’s facial features, particularly the ink-like marks on his face, were the same as they were when he was a demon. In addition, he still had the same bizarrely deformed body and hair as he did before he transformed into a demon. He had pale blue eyes that were noticeably bloodshot and had obvious veins bordering his sclera. and as can be seen below, his uneven and missing teeth appeared to regenerate into sharper ones. When Ume was born, and he began working for a brothel as her collector, his clothing improved. He now wears a short-sleeved, wide-striped kimono with a noticeably cleaner and firmer fabric. When he was younger, he was often spotted wearing a filthy, torn kimono. He lived barefoot both as a human and a demon, which is one notable detail.

Daki’s human name was Ume, and Gyutaro and Ume were siblings who lived in poverty before Gyutaro learned how to fight, and Ume started gaining the notice for her beauty. Gyutaro is extremely proud of his position as Ume’s older brother, who she has never felt guilty about asking to ride to her aid. When she was burned alive while he was away, he was saddened because he thought of her as his pride and joy. Gyutaro seems to have found a means to never again have to take the chance of being apart from Ume after they turned into demons.

Gyutaro and Ume’s lives became inextricably linked after they were discovered by the former Upper-Rank Six and transformed into demons. When Gyutaro is within Daki’s body, it is impossible to kill her. When he exits, neither of them can be killed unless they are both beheaded at once. Though Gyutaro did not deny Tengen Uzui’s suspicion that they would perish if Gyutaro were to absorb Daki and subsequently be beheaded. Daki appears to have taken the lead among the two since he was much more near-death than Gyutaro was when they were transformed into demons.

Gyutaro’s capacity to remain inside Daki’s body seems to be more than simply a way for them to never be separated; it’s also the safest place for her to be. Gyutaro’s sole purpose in existence is to keep his sister safe. Therefore he seemed willing to merely stay within her body and let her go until she required him. Gyutaro prioritizes taking care of Daki even when he is compelled to leave her body to defend her. Gyutaro even went so far as to give Daki one of his eyes, not only to energize her but also so he could watch over her as they battled separately. Gyutaro portrayed himself as being cruel, petty, and jealous of anyone who was blessed with a better life than him due to the tough life he lived in almost constant poverty and the harsh tragedies he experienced as a human. As a result, he developed the habit of mockingly complimenting someone’s best qualities and then attempting to avenge them, as he did to Tengen Uzui. Gyutaro eventually came to the conclusion that is taking from those who live a better life than he did as a human is justified as a result of the sufferings he endured as a human. He has a tendency to hurt himself when he is furious, upset, or jealous, as evidenced by the time he became envious of Tengen and scratched himself so forcefully that he tore deep wounds into his own flesh.

Gyutaro, who has battled many Demon Slayers and Hashira over the course of his more than 100-year life, has developed a tendency to underestimate his opponents and regard them as inferior, as he did with the group of Demon Slayers sent to kill him by having his sister deal with them first rather than himself.

Despite his flaws, Gyutaro does have a real, passionate love for Daki, his younger sister. This familial love was so deep that, despite becoming a demon and almost forgetting his existence as a human, he still held a significant relationship with her. He reared her himself due to his mother’s mental illness.

Later, even in death, Gyutaro demonstrated his concern for Daki’s welfare by directing her in the opposite way where the light was better, demonstrating his desire for Daki to start anew without him being a negative influence on her. A hail of blood blades known as Flying Blood Sickles. Tengen managed to flee via a hole he dug in the floor, surprising the malnourished demon, so his strike was ineffective. Gyutaro ordered his attack to turn, which revealed that it was auto-tracking. Again deflecting the strike, Tengen threw and then set off a number of little bombs near Gyutaro. Gyutaro survived the bomb while wearing his sister’s ribbon and boasting that they were one. Rotating Circular Slashes: To assault them, Flying Blood Sickles will release a lot of blood slashes.

Tengen Uzui seizes Tanjiro and tosses him back to shield him from the assault before they can get to him.

Gyutaro carries a pair of flesh-and-blood kama, which are made from his own body. They are his primary weapons in battle and are incredibly strong and sharp, capable of tearing through flesh and easily deflecting assaults from Nichirin Swords. They are blood crimson in hue and have a meaty surface. Gyutaro momentarily shows the ability to telekinetically manipulate his Kama, causing it to return to him like a boomerang. Gyutaro probably got the idea for utilizing a pair of Kama as a demon from a pair of similar Kama he once owned as a kid that someone had left behind.