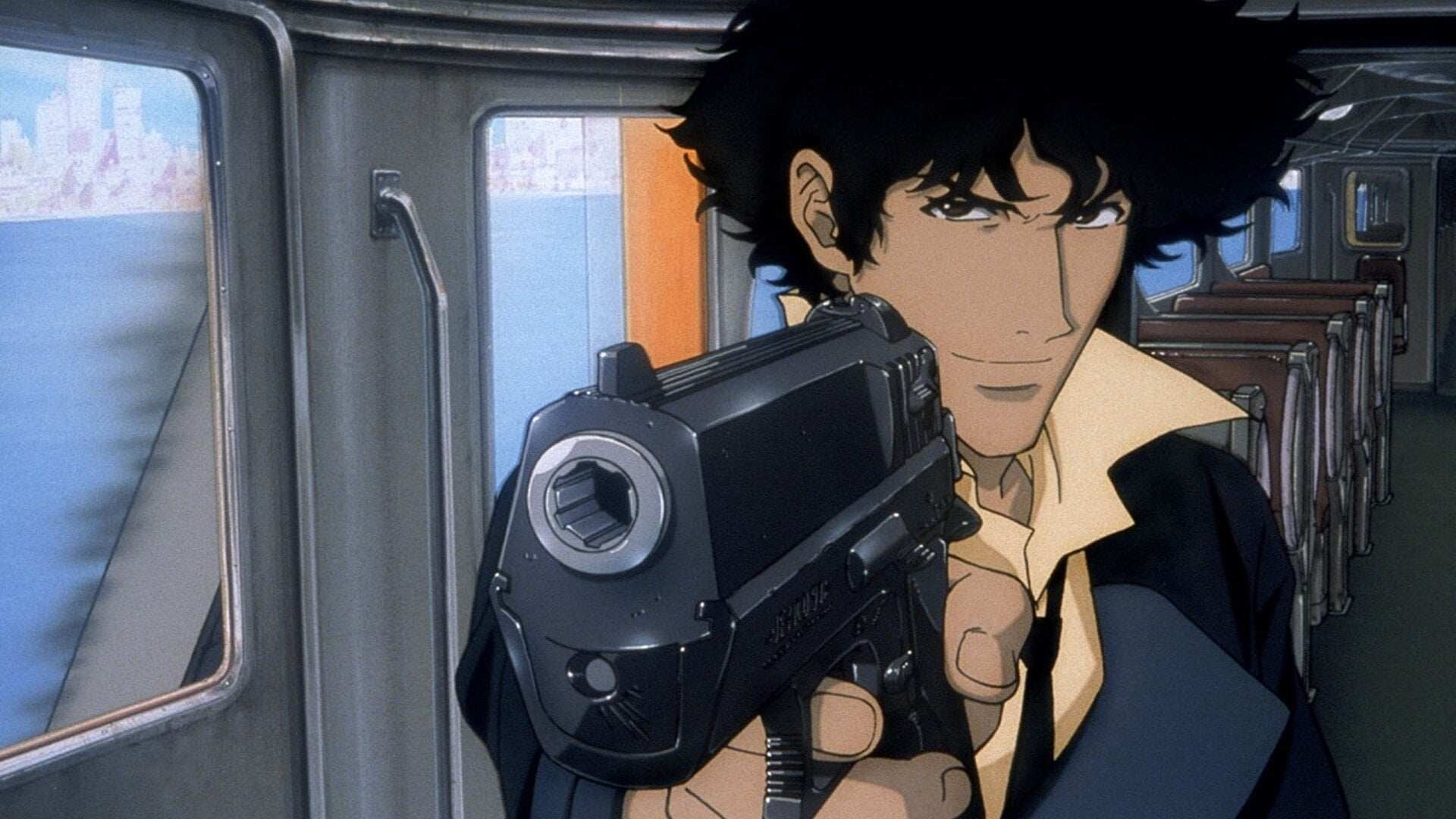 Cowboy Bebop is one of the best retro Anime you can watch right now. It follows the story of a space cowboy named Spike Spiegel who allied with Jet Black to become a bounty hunter. Later, they are joined by a female character known as Faye Valentine and then a child named Edward. Hence, the Anime is full of interesting characters and villains which makes the product catalog a must-have for all Cowboy Bebop fans.
So in this article, we’re going to look at the most iconic and best Cowboy Bebop Products you should buy right now.

When we talk about Spike, he’s the most popular character in the series. Pop-Up Parade figures in general have a quite detailed design but they come at a budget price which makes them an interesting item to own. The action figure is around 17-18 cm in height and it features Spike in his usual pose with one hand in his pocket and holding a gun upwards in the other.
Everyone loves how fashionable Spike is and especially considering that the Anime came back in the 90s, this Spike figure captures the essence of what Spike would look like in an actual world. So, if you want to buy an action figure that won’t cost too much but would look great wherever you put it, then buying this Spike Pop-Up Parade figure will be the best choice.
The Spike Pop-Up Parade will look iconic with Jet’s Pop-Up which we’re about to discuss.

Jet Black is the secondary protagonist of the Cowboy Bebop series. He’s like a best friend and a brother to Spike and both met each other in hopes of becoming space cowboys and earning a lot of money for their everyday survival. Jet is a tall, wide, and muscular man. He’s bald and only has hair on the side of his head. His beard is in a unique shape and even though he would wear a flight suit most of the time, this figure incorporates him wearing the casual outfit that he would wear when he’d join Spike in a nightclub or an underground mission.
The action figure is quite premium and it would look quite badass if you put it up against the Spike Pop-Up Parade figure. Both figures are the epitome of style, premiumness, and usability wise, these will make your collection rock! 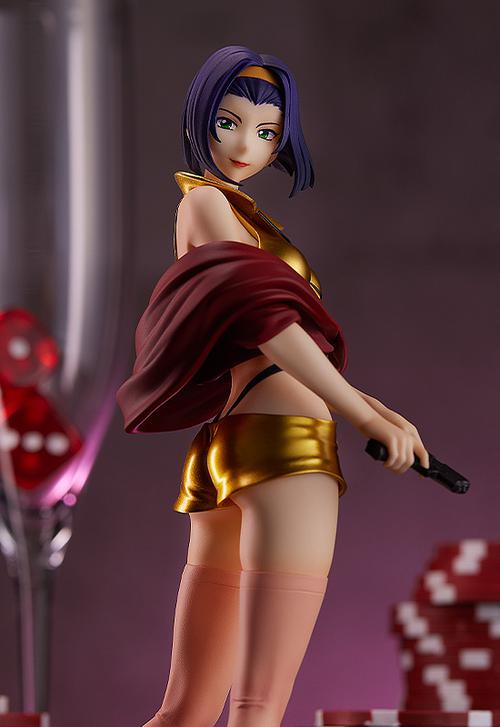 Faye Valentine is a beauty and the third protagonist from the Cowboy Bebop series. She’s a cute, lean, and beautiful girl and this figure captures her in her regular outfit where she’s looking behind from her shoulder side. The action figure contains her standard yellow outfit, shorts, and a buttoned shirt with white boots that make this action figure quite cool.
Having all three Pop-Up parade figures will make sure that you own the whole squad. Adding in Edward and Ein will complete your collection. However, each Pop-Up parade can be used individually as well.
This Faye Pop-Up parade captures the right emotions for her since she’s quite laid back and relaxed all the time. If you’re a Faye fan, this figure will be eye-candy for you!

Edward and Ein are also part of our Cowboy Bebop crew. Even though they had a hard time with each other since Spike disliked children and dogs, he finally accepted everyone he hated. Edward’s action figure was captured in the scene where he was holding his dog, Ein. She’s a skinny dark-skinned teenager who knows how to hack practically anything. This is why Edward is such a strong part of the Cowboy Bebop squad.
Now, when we talk about the quality of this Pop-Up parade figure, it’s insane. It features Edward holding Ein while wearing her loose T-shirt which reveals her navel, some compression shorts, and no footwear at all. The designers made sure that the product would be as accurate as of the actual Anime.

Swordfish II is like a baby to Spike Spiegel and is one of the most fan-favorite ships of all time. This ship is used by Spike to hunt down bounties and engage in battles in space. The masterpiece was created by the designer Kimitoshi Yamane and has been translated well into the design by the manufacturer. The scale figure includes folding wings, landing gear, ailerons, plasma cannon, brake, removable cockpit, and a lot more. The attention to detail is just amazing.

The officially licensed T-Shirt by Crunchyroll is perhaps one of the simplest yet most popular Anime T-Shirts of all time. It features the text saying “SEE YOU SPACE COWBOY” and as simplistic as it is, it looks amazing on anyone who would want it.
So, if you want a simple T-Shirt that would make sure to tell everyone that you’re a fan of Cowboy Bebop, consider trying this one out. 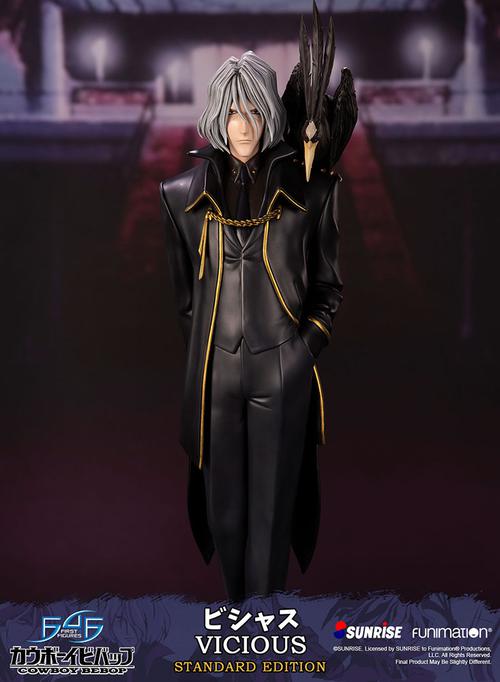 Vicious is probably the darkest Anime character of all time. He has a nonempathic personality along with an evil smile and a very intimidating personality. Vicious wanted the best for himself and was quite cynical towards the world. That’s exactly what this action figure aims to provide to the owners.
It features Vicious having a blank face with a bird on his left shoulder and he’s hiding a knife in his backhand. Sounds intimidating, right? 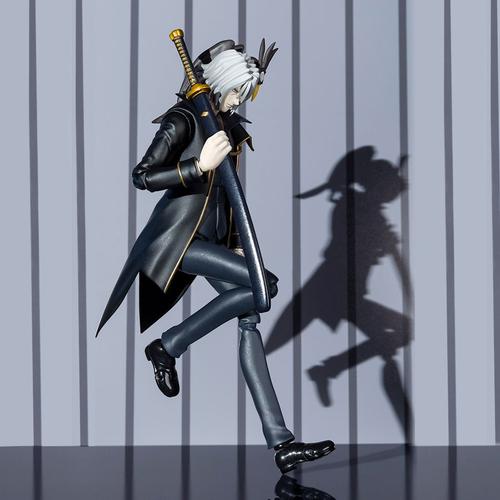 One of the most interesting action figures of all time, the S.H Figuarts Vicious action figure is probably the most detailed one on the planet. It makes us seem like Vicious has been transported into the action real world as the amount of detailing is just insane.
A unique aspect of this action figure is that it has interchangeable facial expressions and hands. There’s a knife and a sword is also included which makes it quite a premium Vicious figure. 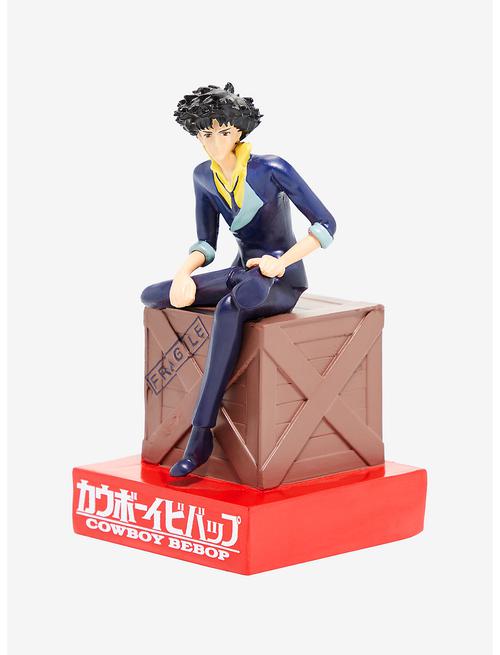 If you are looking for a very low-budget action figure then buying this Desktop figure will be an ideal one for you. It features Spike sitting on a box that says Fragile. This shows us the uncaring personality of Spike as he’s always setting himself in trouble.
While this might not be the coolest-looking Spike figure, it still looks quite premium. The Vinyl figure by GameStop is perhaps a very cute one and it looks premium as well. If you want to own a very cost-friendly figure that would capture Spike at its purest, then investing in this Spike Spiegel 5-inch Vinyl figure will be your best choice.
This figure is a substitute for the look-up figure. 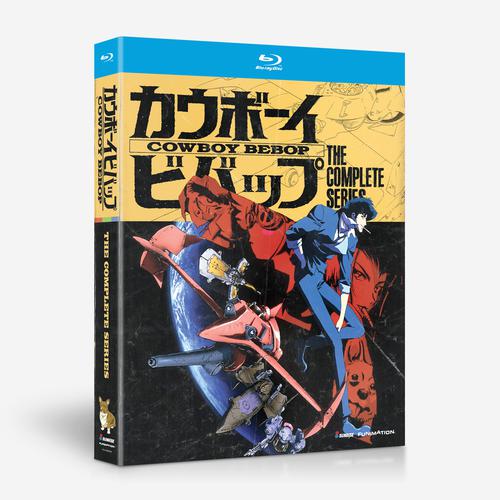 And that’s about it. These were the Top 10+ best Cowboy Bebop products that you should buy right now. There are countless products to choose from, however, if you want the best of the best, we have thought about the list and would love to help you guys out.