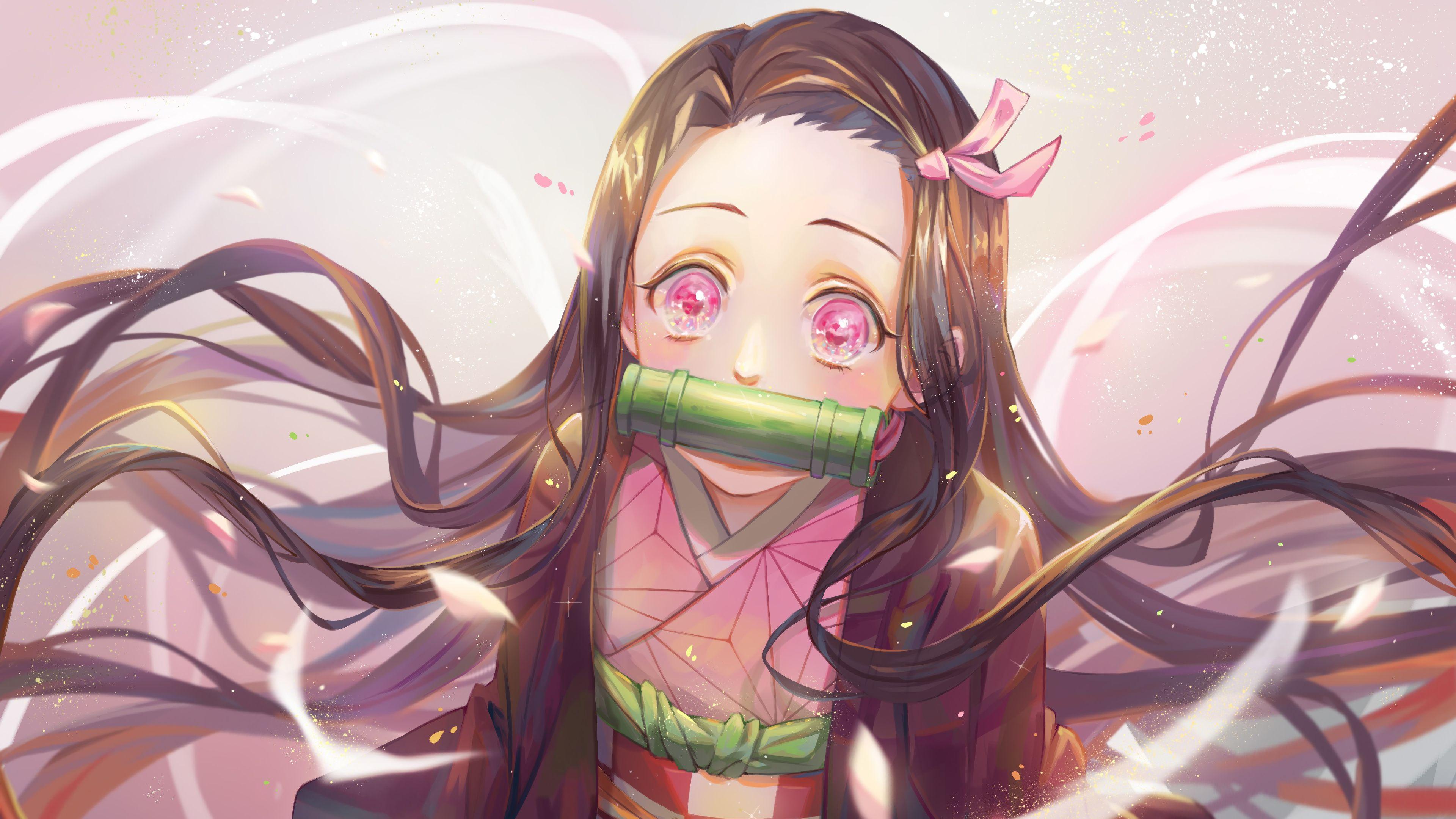 Nezuko Kamado is the deuteragonist of the Demon Slayer series, and she’s the younger sister of Tanjiro Kamado, who got turned into a demon by the infamous Muzan Kibutsuji. As she used to be a human and beloved by his brother, after turning into a demon, Tanjiro swore that he would cure Nezuko and bring her back to her normal form.

So, let’s talk about Nezuko’s personality and how she behaves in the series. 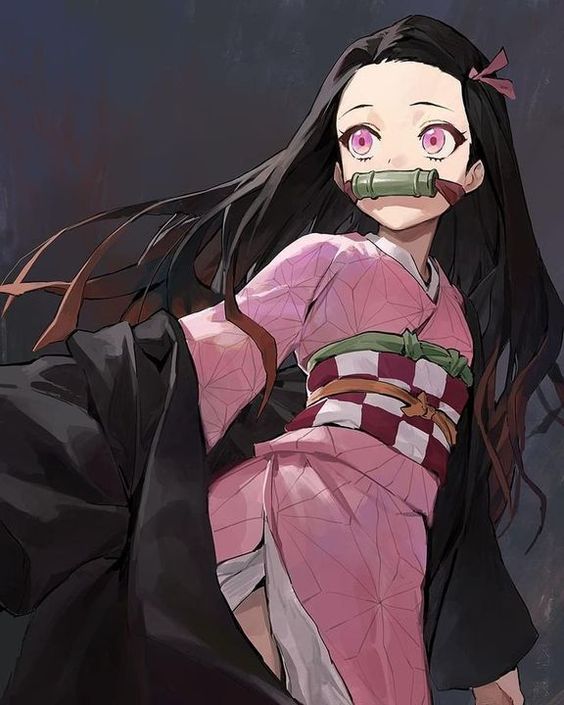 In Demon Slayer, Nezuko plays an important role in shaping a lot of events. This is because the whole storyline started because of her. As she was in her human form, Nezuko was depicted as a kind and soft human girl who would care about other people more than herself. She’s also a very kind sibling to her brothers and sister, and she always cares about them.

Nezuko also has an undisputed personality when we talk about sheer willpower. She would protect her loved ones from demons. However, as she was turned into a demon, initially, she craved a lot of blood, and her thirst for human flesh was all around the place.

However, after seeing Tanjiro’s desire to protect her from being handled by the Demon Slayer Corporation, she got complete control over herself. On the other hand, as most demons would remember their previous human lives, Nezuko forgot a good chunk of it, and that might be the reason why she can control herself even in the demonic state.

Even after getting turned into a demon, she still has a soft side for humans. And after becoming a demon, she doesn’t get afraid of fighting and has very strong willpower, which we can estimate from the fact that she doesn’t eat flesh even though she craves it.

Since she’s a demon, her speed is affected too. However, she tries to speak once in a while, but it’s hard for her. 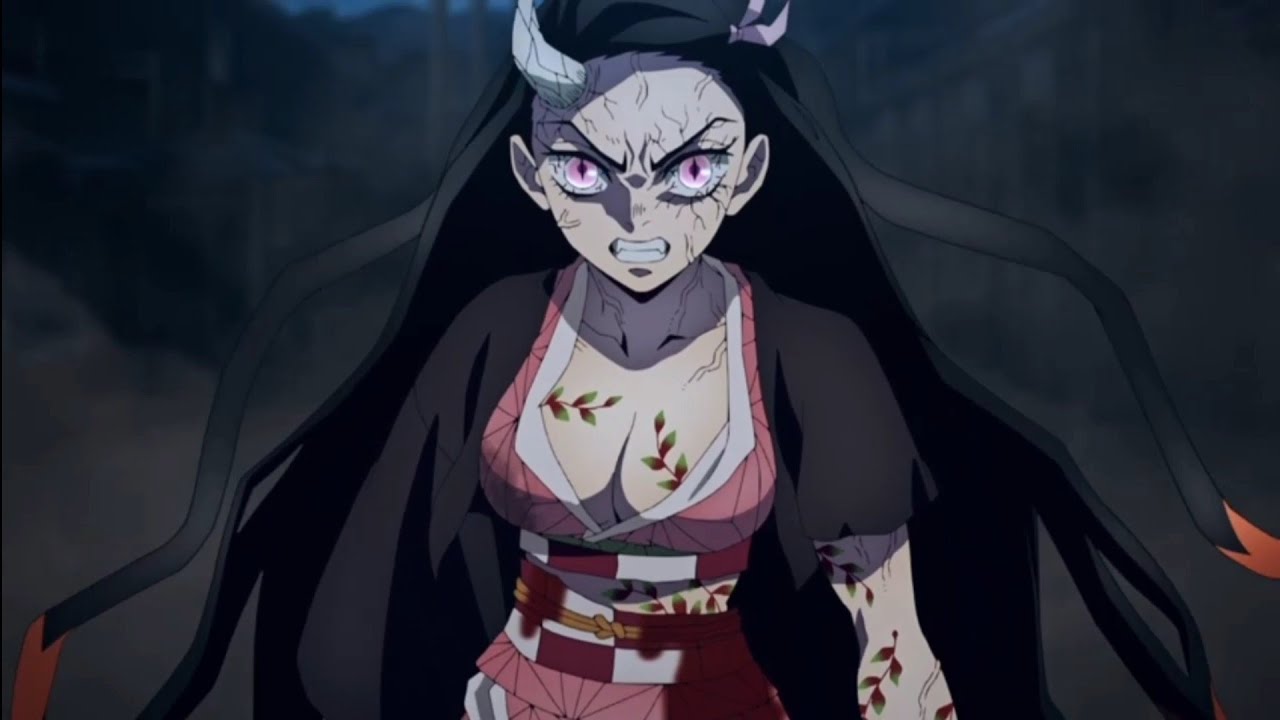 Nezuko is a cute, young, and petite girl with white skin, large fangs, and hair that ends up in a red-pinkish color. Nezuko has beautiful hair that goes down to her waist. She has big pink eyes that look quite beautiful when she’s in an area with a lot of lights.

According to her brother, Tanjiro, Nezuko was known to be the most beautiful girl in her hometown, and that makes sense. She wears a light pink kimono that has a hemp leaf pattern on it. She also wears a dark-brown haori that goes down to her calves. And after getting a mouthpiece from Giyu, she tied it up around her jaw using a piece of cloth so she won’t be able to bite anyone even if she wanted to.

After transforming into a full demon form against Daki, Nezuko’s body became more mature and full of curves. Her hair reached down to her feet, and she lost her muzzle. She also grew a short horn with a weird pattern on it. But even in her demonic form, Kamado Nezuko remains quite like her human form. All in all, the Anime version is much better than the Nezuko in manga due to the number of high-quality effects involved.

Before she got turned into a demon, she had quite a similar physical appearance in both states. However, she just lacked basic demon things like her red hair, pale pink eyes, and blood lust. Nezuko wore the same kimono in her human form. However, it was with haori. From all the research, we can claim that Nezuko is indeed the most beautiful girl in Demon Slayer. 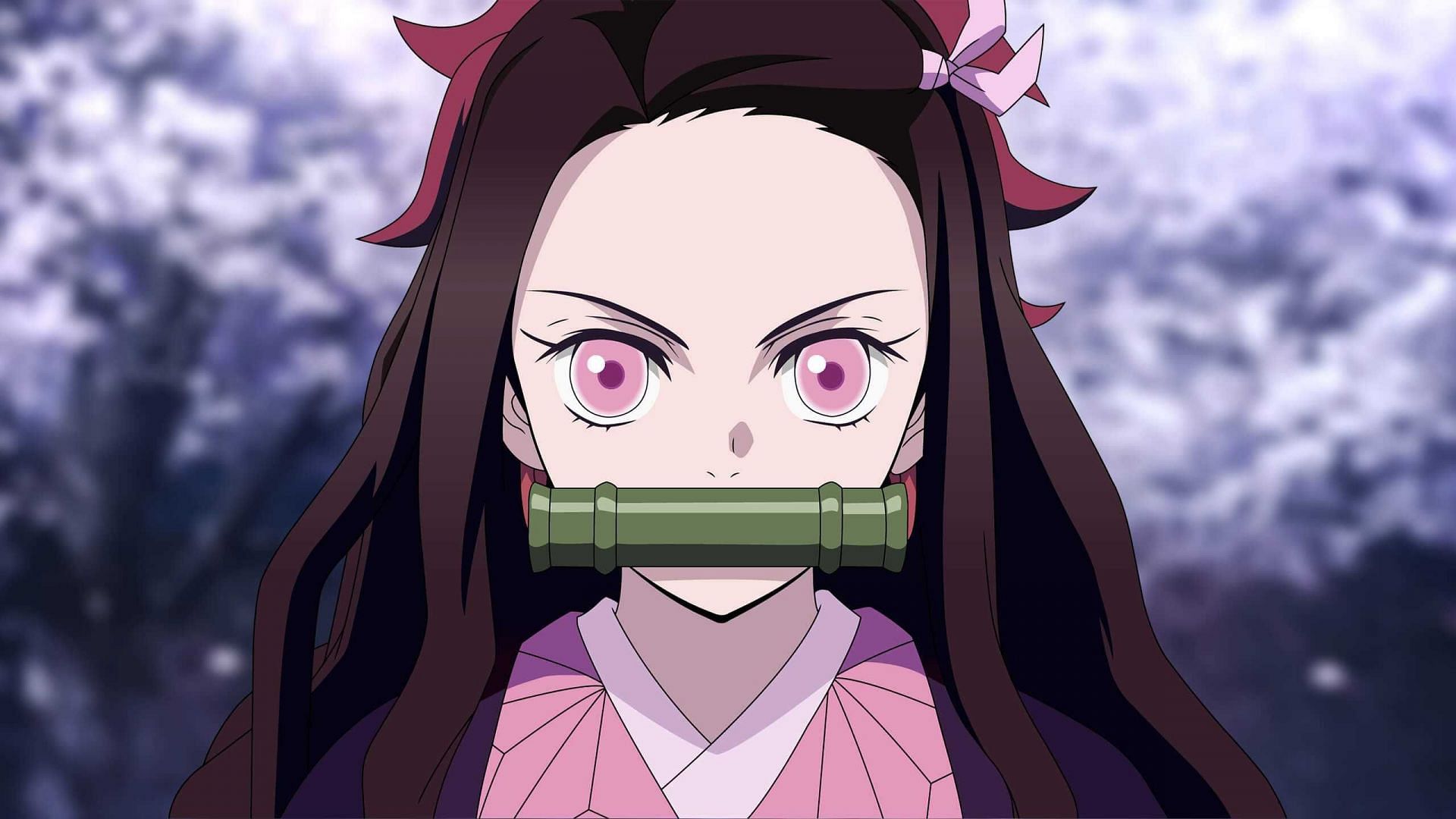 Even though Nezuko wasn’t a member of the Twelve Kizuki, she is known to be a very powerful demon, as Muzan himself tried to hunt her for himself. After getting blood from Muzan himself, she could change her size, overpower a lot of strong demons with just a single attack, and display her beautiful abilities in a couple of scenarios.

Even though she’s quite young when it comes to her age, Nezuko’s abilities are flawless, and her skill in battle is impeccable. She was able to overpower Temple Demon, Susumaru, and Daki, so that’s an estimation of how strong she might be. Now, let’s talk about some of the most popular Nezuko’s abilities.

Both Tanjiro and Nezuko are quite the prodigy in Demon Slayer. However, as Nezuko can go into her berserk mode, she becomes more demon in her appearance and can transform into an adult version where she grows a horn on her right forehead.

This form increases Nezuko’s strength, endurance, speed, and blood lust a lot. She can also regenerate quite fastly, and after fighting with Daki, it was evident that Nezuko could easily go on par with one of the strongest Upper Moons like Daki or Gyutaro 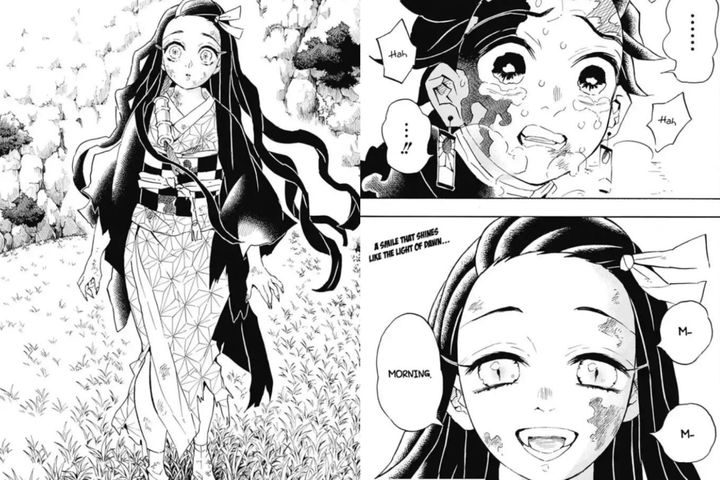 When Nezuko fought with Hantengu, she developed complete immunity to the sun, which Muzan always wanted. The whole reason Muzan was doing experiments was to achieve this type of resistance. With immunity to sunlight, Nezuko can walk out in the sun without any problem. That’s why Muzan changed his goal and wanted to absorb Nezuko so he could become the king of the sun. 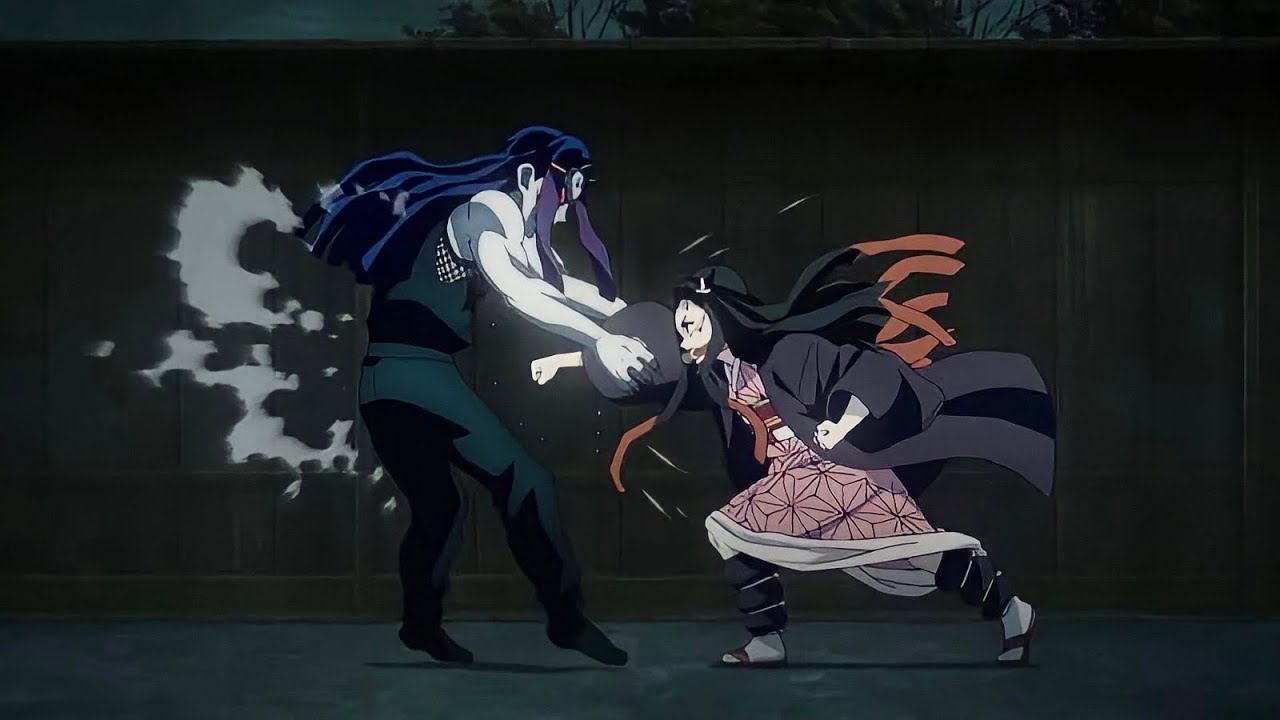 Strength is something that only went up when Nezuko fought with her enemies. Even though she has no combat experience, Nezuko overpowers her opponents with raw strength. This means that there are no sneaky tricks involved. She would just increase her strength, kick the living hell out of her enemies, and that’s about it. 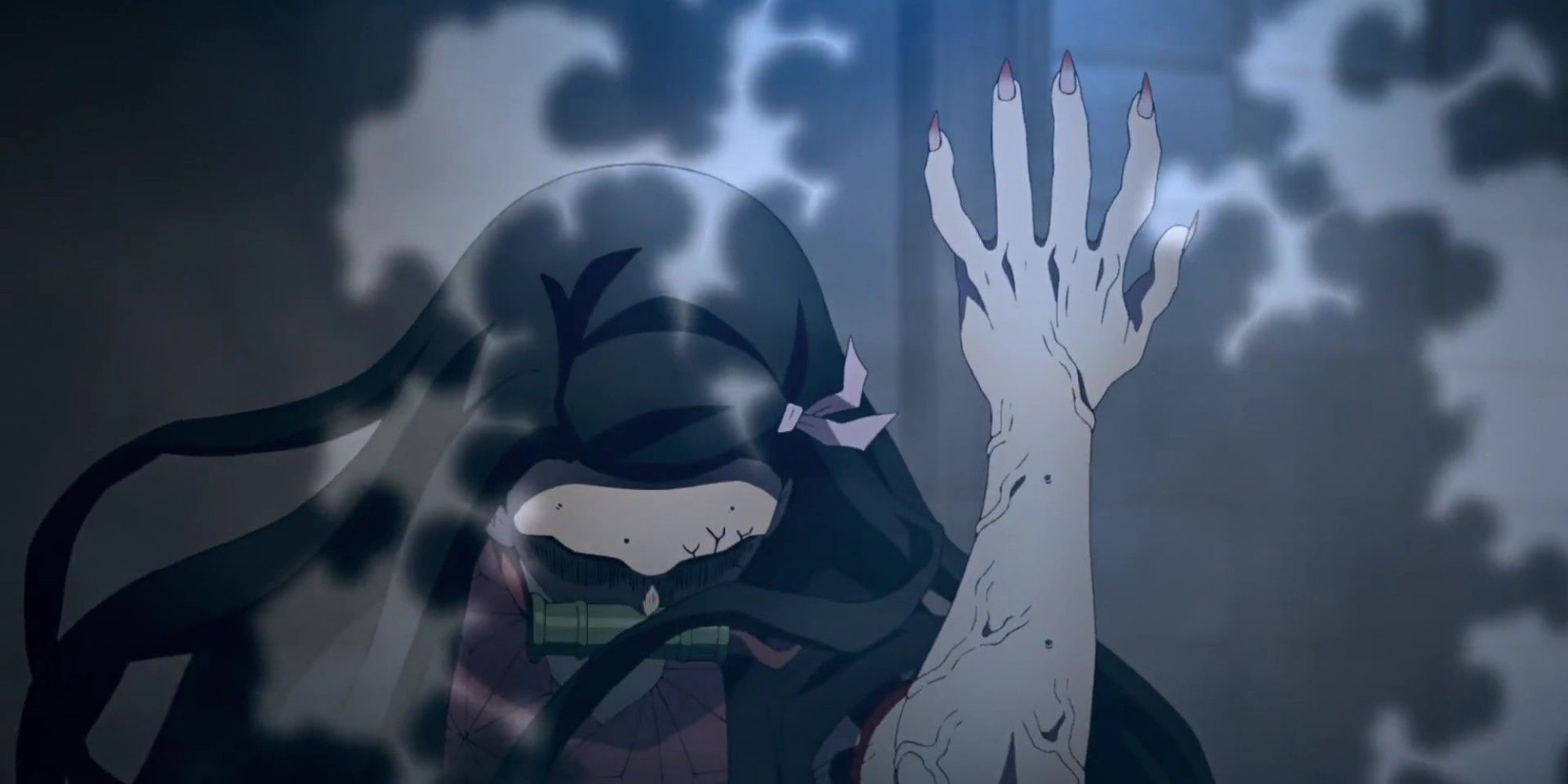 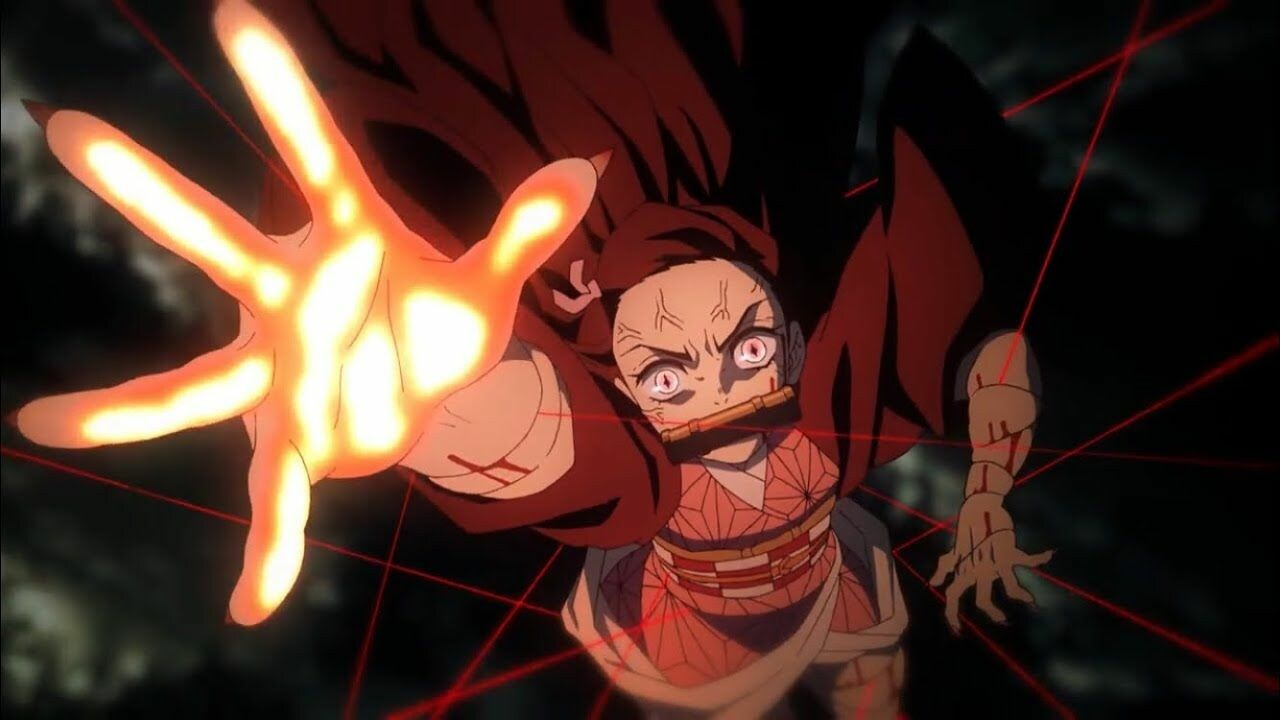 Nezuko is quite a spectacle to look at when we talk about her regenerative abilities. This is seen as she can set demons on fire to increase her attacks or burn off Gyutaro’s poison to save everyone from dying. She also turned Tanjiro’s Nichirin Sword into bright red color, which gave him such a boost in strength when he was fighting against Hantengu.

Nezuko’s dreams contain her family, Inosuke, Zenitsu, and other people that have been nice to her.

Nezuko is quite good at rock, paper, and scissors, and whenever they cannot decide something, she would always wins the game. Nezuko’s favorite food is Konpieto which is a Japanese sugar sweet. Nezuko’s hair is not well done because Tanjiro doesn’t know how to braid them. That’s why her hair looks all over the place but still looks flawless, thanks to her beauty.

Nezuko is 5’0" when we talk about her height.
Nezuko was only 12 years old when she got turned into a demon.

Who Is Shinobu Kocho? The Most Underrated Character in Demon Slayer
Upper Moon 4 Hantengu - Everything You Need To Know
Top 10 Best Nezuko Products You Should Buy
Top 10+ Best Demon Slayer Figures