Kyojuro Rengoku Demon Slayer - Everything You Need To Know

Kyojuro Rengoku Demon Slayer - Everything You Need To Know

Kyojuro Rengoku is the flame hashira and a major supporting character in the Demon Slayer series. He’s well-known due to his role in the Mugen Train movie and that gained him a high reputation amongst the fans and even the characters in the series. He was a Demon Slayer and a Hashira from the Demon Slayer Corps. He’s also the son of the former Flame Hashira Shinjuro Rengoku.

Being a character of high caliber and high potential, Rengoku Kyojuro was only 20 years old and he had quite a lot of potential left later down the road. So, let’s talk about everything you need to know about Kyojuro Rengoku from start to the finish. 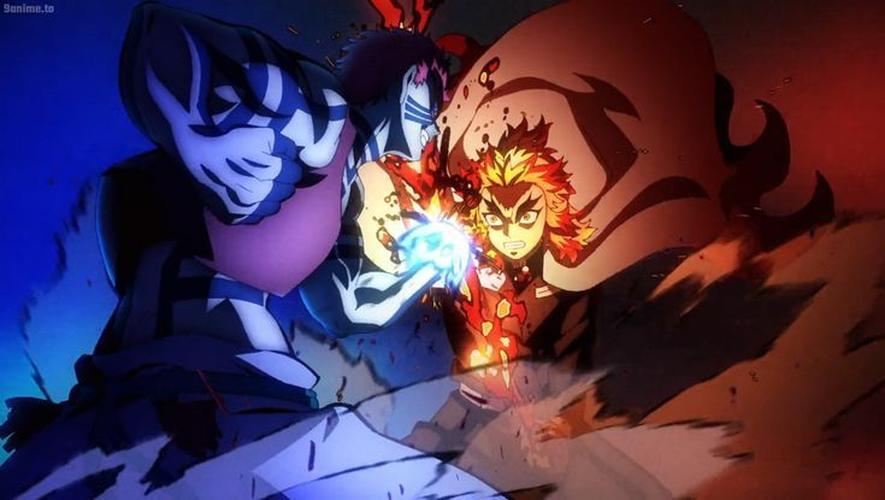 Kyojuro belonged to the Rengoku family and he was the eldest son of Shinjuro Rengoku. His father was the former Flame Hashira but retired due to an accident. Kyojuro also has a younger brother who wants to become just as great as his father and brother.

Kyojuro trained day and night, in order to become the great Flame Hashira, and his training wasn’t easy.

Not only does he have to train himself after his father ceases his training but also protects everyone around him. These circumstances made Kyorujo rather strong. 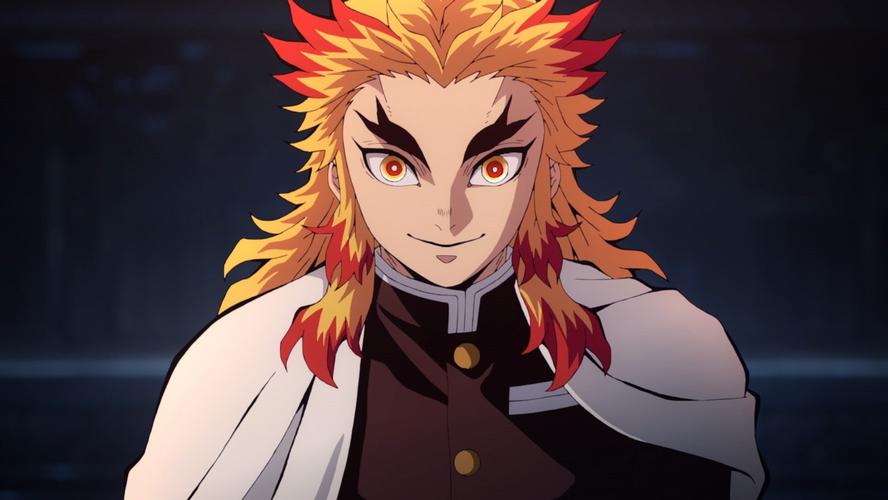 Kyojuro was known as the most enthusiastic person in the Demon Slayer Corps due to his dedication to his duty. Being a Hashira, he seemed a little immature sometimes but that’s just his style of working. On the other hand, he’s full of life, has a pure heart, and is the most responsible person you can think of to give a job to. His extraordinary abilities are proof of his hard work and dedication. That’s why we can conclude that Kyojuro had more of a discipline-oriented lifestyle.

Kyojuro Rengoku was also a very prideful warrior but had an empathy-filled heart towards his family. That’s why he was often shown to worry about his father as his father became a hateful person. However, Kyojuro didn’t let him waste his life, he made sure that everyone in his family was safe, and especially when we talk about Senjuro Rengoku who is his older brother, Kyojuro was careful in making him lead the best life he could.

He also told Senjuro that he should always follow his dreams and take care of his body. Kyojuro is a keen believer in hard work and thinks that even if someone lacks a talent for some skill, it can be covered by working hard towards the dream. And if a person has enough dedication and desire towards that goal, achieving greatness is nothing for them.

Aside from his eccentric personality, Kyojuro Rengoku has shown to be quite logical and intelligent, especially when it comes to battling. He’s shown to easily find the opponent’s next move and counter them with something smarter than theirs. That’s why Kyojuro can also see talents in other people, ultimately making him recognize Tanjiro’s potential. He also saw Nezuko as a family as he could see that she wasn’t a threat to humanity.

Even though Kyojuro believes in optimism, he can become a little brutal at times too. And like most Demon Slayers, he doesn’t like what the demons are doing to the humans. He has to kill demons to protect humanity. 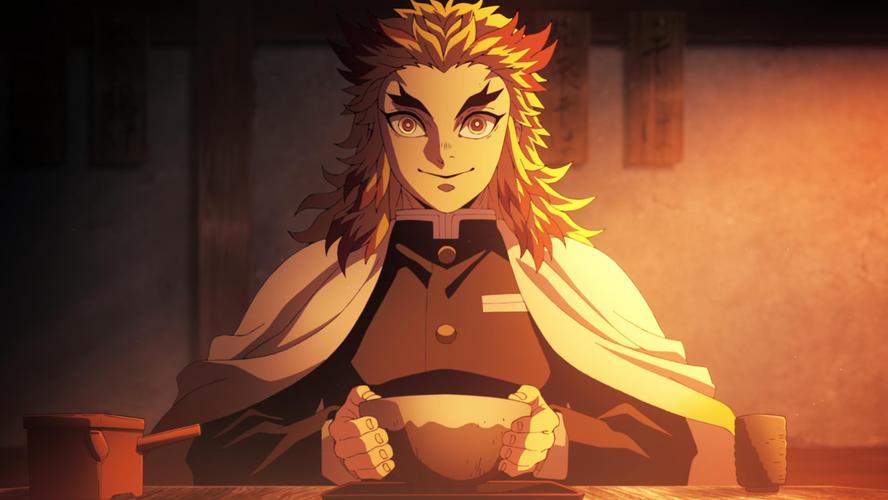 Flaming Hot is the first thing that comes to your mind when we talk about Kyojuro Rengoku. He’s a young adult with a tall and muscular body. He’s quite attractive and charismatic thanks to his beautiful personality. Moreover, having those long yellow hair with red extensions is something that makes him look just like a lion. He simply looks like a lion who’s always on fire.

Kyojuro’s demon slayer uniform was a little different than other Hashiras and he wore a brown gakuran jacket with a white belt. His fashion sense for Anime of that era is crazy. At first, when he joined the Demon Slayer Corps, he used to wear the regular uniform, however, after he became one of the strongest Demon Slayers to ever exist, he changed his style of a white haori and turned it into a flaming hot haori as well.

Overall, looks-wise, no one can beat his fashion sense. 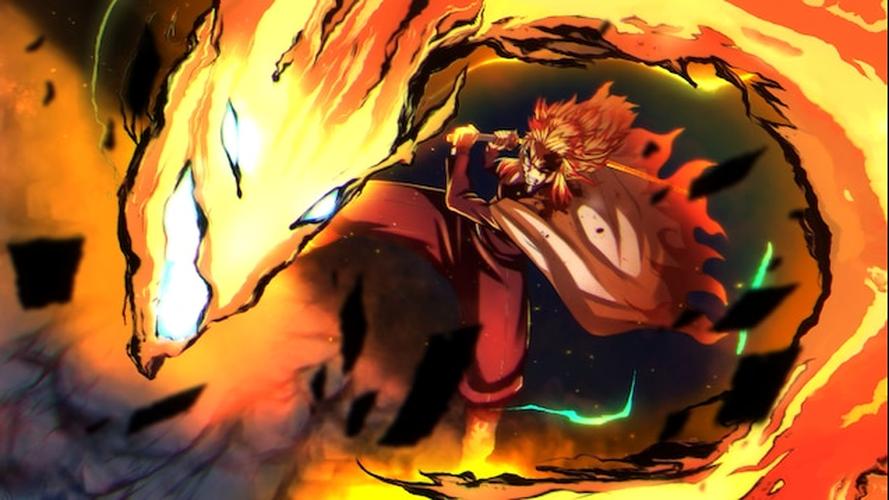 You can’t expect anything less from Kyojuro. He was a very skilled and powerful combat master. Before he took his father’s place as the Flame Hashira, he already showed his potential to the world and what type of trusting leader he was. He also avenged the sad death of 9 Demon Slayers who got killed by Flute Demon.

He went to the Flute Demon himself and single-handedly defeated one of the strongest Lower Rank demons known as Hairo. Hair was the Lower Rank Two which means he was still crazily strong. Hairo was so impressed by Rengoku that he even praised him for being so skilled with his sword.

On the other hand, Kyojuro’s father stopped training him but he didn’t stop there. Kyojuro trained by himself from a book of Flame Breathing style. This book only had three volumes but he was able to master the flame breathing style. As another proof of Kyojuro’s strength, even Akaza, an upper moon 3 was able to be blown away by his strength. He even wanted Kyojuro to join him as a hashira since he would be crazy strong if it ever happened. He almost received the Transparent World and Selfless State in the Anime before dying at the age of 20. Now, let’s talk about Kyojuro’s strengths one by one.

When we talk about Kyojuro’s stamina, it’s pretty darn impressive. Throughout Mugen Train, he was able to endure pain for a long amount of time without giving in. It could either be his will for extraordinary stamina and endurance. Moreover, even though he had a lot of gunshots coming from the Lower Rank Two, he could easily fight Hairo without showing many signs of fatal injuries. He even showed his strength against Enmu who got fused with the train.
Later on with Akaza who is one of the strongest demons to ever exist, Rengoku was able to show extraordinary endurance even after getting his eye smashed, several fatal wounds, broken ribs, and a lot of other injuries. Moreover, he was even able to give Akaza a hard time by hitting him in the vital spot.

Unshatterable Will and Keenness 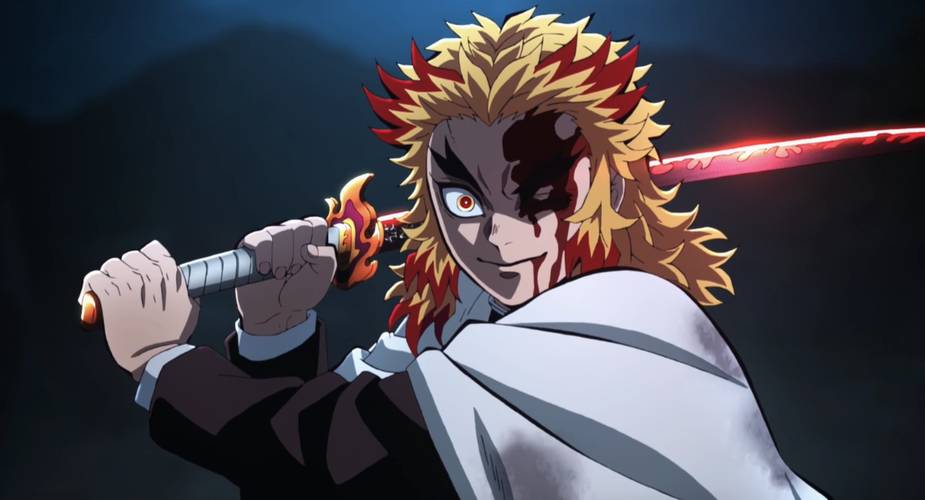 Kyojuro had an awesome spirit and willpower that was beyond human logic. His will impressed the Upper Moon 3, Akaza who, even though had an upper hand in the battle, was able to be blown away by the amount of sheer pressure Rengoku was able to handle. The undaunted spirit is something Rengoku has built over time, slowly, while going through countless difficulties of life. Even after getting overwhelmed by the huge pressure of Akaza, Kyojuro didn’t flip. He was able to move on with his sheer will and love for a long time even after getting stabbed in the worst way possible.

When we talk about his combat knowledge, it’s something crazy. He mastered Flame Breathing just by reading the incomplete Flame Breathing guide that only had 3 volumes. This means that Kyojuro wasn’t just all talk but he was quite smart too. He also displayed great judgment skills against Akaza which ultimately makes him one of the best Hashiras to ever live. 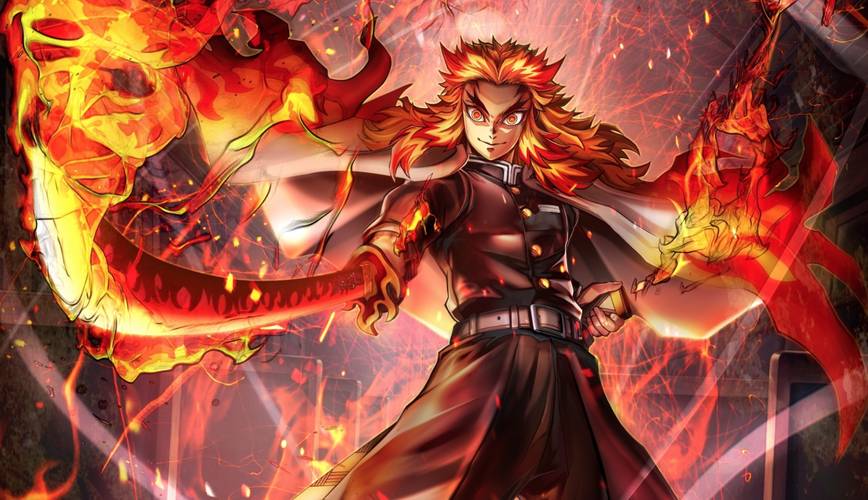 As we all know, Kyojuro was a Flame Breathing Style user. It was taught to him by his father for the most part but he later mastered it using the instruction books left by the previous flame hashira. He became quite a master of the breathing style and here are all of his forms.

● First Form: Unknowing Fire
In the first form, Kyojuro would move close to his enemies and try to kill them in one go.

● Third Form: Blazing Universe
In this form, the user would swing the sword downwards instead of going upwards.

● Fourth Form: Blooming Flame Undulation
This form lets the user spin in a circular motion and by using the blade, they can defend themselves.

● Fifth Form: Flame Tiger
In this form, Kyojuro uses his slashes in a way where they look somewhat similar to a flaming tiger.

● Ninth Form: Rengoku
The ninth form takes the form of a dragon that dashes towards the opponent and has the potential to burn the ground while causing a deep hole. This is Kyojuro’s strongest attack.

In his battle with the Upper Moon 3 Akaza, Rengoku got killed due to fatal injuries. The match was drawn for the most part until Akaza got serious and destroyed Rengoku. Even in his dying moments, Kyojuro was able to finish the match in grace.