There are some Stranger Things Funko Pop Figures in awesome styles. Do you want to get something from which you can get inspiration every time you see it? Then, nothing will be better than buying Strange Things figures that are beautifully designed which gives you an idea of sticking to the good no matter what. The best thing about this figure is that it shows the bond of friendship that is necessary to move forward in life. So, with these figures, you can get the idea of fighting together in any situation. 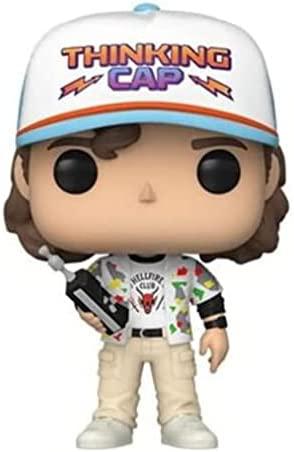 Do you want to buy something which offers you true friendship and sincerity? Then, Funko Pop! TV: Stranger Things - Dustin Vinyl Figure would be a perfect choice. This figure is designed exquisitely and you would love to add it to your collection. Although he looks like a nerd who’s having no front teeth because of a rare genetic disorder (cleidocranial dysplasia). But he remains a true friend of Will and when he has been captured by a monster from “Upside Down”, he never settles and tries every possible way of rescuing him. He becomes a good friend of Eleven, Lucas, and Mike as well.

Moreover, this Funko Pop! TV: Stranger Things - Dustin Vinyl Figure is a nicely designed figure which allows you to have a nice feeling. The best thing about this figure is that it is finely made and nicely depicted. The shirt is having cute print and the logo of the T-shirt looks awesome and when it’s combined with off-white pants then it looks amazing. Even getting to know that his friend is abducted by a monster he never gets afraid. There’s a remote in his hands which shows that he is ready to experience scientific experiments. Its material is vinyl and its size is 4.05 inches.

If there is a stylish figure missing in your collection. Then, you should go for Funko Pop!: Stranger Things - Steve Vinyl Figure which is nicely made and beautifully articulated. Steve is considered the most stylish boy in the Strange Things series and is nicknamed King Steve due to his popularity. Having nice facial cuts and a classic hairdo he is considered as having a terrible personality. He helped Nancy in beating the monster and later on he becomes a true friend of Dustin. Even when the children are in danger then he took the role of a ‘babysitter’ to protect them.

In this regard, Funko Pop!: Stranger Things - Steve Vinyl Figure is classic in style and finely articulated. The best thing about this figure is that the hair is nicely done and you will be amazed to see the perfection of every strand that is presented in it. The dark brown hair goes down to his neck which gives him a cool look. The combination of blue, green, and white in his costume looks amazing and the big head of the figure shows proper alignment with the body. The vinyl material is of high quality and its dimension is 2.5x2.5x3.75 inches. 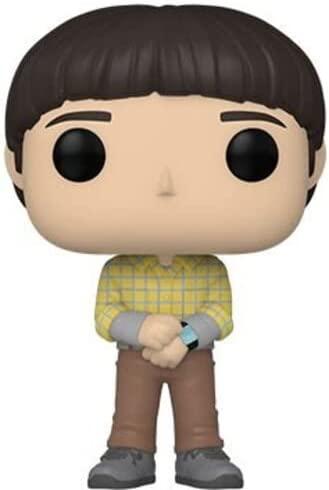 The innocent faces in figures allow you to look at the world from a different perspective such as Funko Pop! TV: Stranger Things - Will Vinyl Figure. It is designed nicely and you will be amazed to see the accurate finishing of the figure. Will is the main character in Strange Things who has been abducted by the creature called ‘Demogorgon’. He was being inflicted by the monster but got rescued by Joyce. After that, he tries to act normal but he sees visions of the creature, and he aid Mind Flyer who controls his body as well. However, he’s a soft-spoken and amicable person who’s exceedingly intelligent.

Therefore, Funko Pop! TV: Stranger Things - Will Vinyl Figure is a high-quality figure with precision and nice articulation. The bob-cut hair of this figure is accurate which is nicely cut and gives him an innocent look. The wide opened eyes of this figure depict that he is inquisitive and ready to do anything to subside his enemy. The yellow shirt with a blue check gives him a decent look and the combination of brown pants gives him a sophisticated look. The vinyl material of the figure is of a high quality that lasts longer and it stands at 3 ¾ inches. 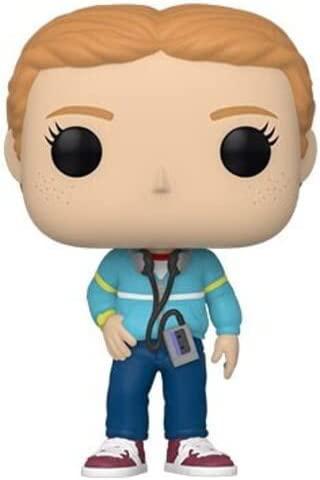 If you want to add a truly brave figure to your collection then, you should go for Funko Pop! TV: Stranger Things - Max Vinyl Figure. Max is presented here as a main character who is said to be a tomboy. She loves to play skateboarding and is proficient in playing ‘Mad Max’. She stood beside Billy whenever he’s been beaten by his stepfather and tries her best to protect him. She keeps herself aloof from other people. But she becomes a friend of Mike, Lucas, and Eleven and fights with the monster.

In this regard, Funko Pop! TV: Stranger Things - Max Vinyl Figure is nicely articulated and beautifully designed. You will be amazed to see that although it is the character of a girl the hair is parted from the middle which gives you an allusion to a boy. The blonde hair looks exquisite on her and the tape recorder on her waist depicts that she has a lot of love of music. The combination of light and dark blue looks exquisitely beautiful and the wide eyes look quite curious. The long lashes give it a beautiful look. The vinyl material used in it is of high quality and its size is 3 ¾ inches. 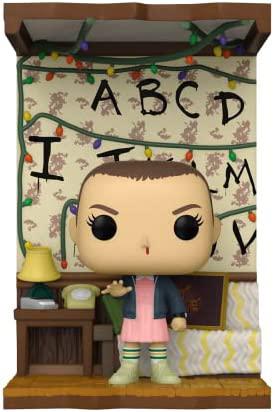 Do you want to add to your collection a figure that is not only brave but also never abandoned her friends? Then you should go for Funko Pop! Deluxe: Stranger Things Build-A-Scene – Eleven is beautifully articulated and nicely designed. Eleven is a character of a girl who’s being kidnapped by Dr. Martin and he has done various experiments on her in Hawkins National Laboratory. There she’s been forced to call a creature from another world so as a result, a monster came accidentally when one experiment got failed but it’s hard to send it back. She ran from there but kept on fighting throughout the series.

Moreover, Funko Pop! Deluxe: Stranger Things Build-A-Scene – Eleven is nicely depicted and beautifully articulated. The best thing which makes this figure unique is that it gives you a scary look as the running blood from the nose is there which depicts that something awful is going to happen. The shaved head also shows that she is not having any taste in what the other girls usually have at her age. The tube line socks and pink frock shows that she is having other perspectives than just dressing. You will get 3 other figures as a bonus. The vinyl material lasts longer and its dimension is 3x4x5 inches.

To sum up, Stranger things is a series that allows you to look at life quite differently. Although there have been difficulties in life one should never compromise on doing good deeds. So all the characters in the series give you the idea of not abandoning anyone even though the situation may become worst. Don’t forget to look at the material used in them whether it’s of high quality or not so that it may not get rusty even though you may use it for a longer period.