If you want to buy a stylish figure in your collection then nothing would be better than Mozan Kibustuji who is nicely displayed in the figures that will amaze you. He remained a brave person in the series and inflicted the innocent whoever is not obeying his orders. So, to get away from death he fought many times and he wanted to remain eternal. In this regard, his character is not only mysterious but also shows his curiosity about moving ahead and making others obey him. Looking for a nice figure in your collection? Then, you should try out Demon Slayer: Kimetsu No Yaiba Demon Series Vol.6B Muzan Kibutsuji which is beautifully articulated and exquisitely carved. Muzan is considered quite a strong person who can convert a human into a demon just by injecting with his blood. After becoming the enemy of Kamado’s family he has turned Nezuko into a demon and show his wrath on humanity as well.

In this regard, Demon Slayer: Kimetsu No Yaiba Demon Series Vol.6B Muzan Kibutsuji is a nice figure who has a strong character. The best thing about Muzan is that he can get mixed into society quite easily. Here he is being shown carrying a book in his hands and dressed as a high school boy which gives him a sophisticated look. The cutting and pleats of his shirt are quite precise which gives him a neat look. The knee-length shorts are so nicely fitted to his body and the hair is drawn backward which gives him a nice look. Its size is 5.5 inches and the PVC material used in it is of high quality. Do you want to add to your figure collection the one where you may find 2 stylish pieces? Then, you should get a figure such as【PRE-ORDER】ZTH Studio Kibutsuji Muzan. The best thing about this figure is that it can be displayed with 2 characters one is a woman and the other is a man who is in a stylish costume. Muzan Kibutsuji remained a brave person who inflicted on the innocents by showing his wrath on them. In the Demon Slayer series, he has caused many people to die whoever tries to abandon his orders.

In this regard, 【PRE-ORDER】ZTH Studio Kibutsuji Muzan is in a stylish design with exquisite colors. Mozan is displayed in it as standing on the throne that is beautifully carved and the combination of deep red and pitch black is awesome. In one character Mozan is shown as costumed as a lady where the gown is having a long slit where the leg is shown quite stylishly. In another character, Mozan is shown in a casual dress with a long white coat which looks amazing on him. Its size is 53cm and the PVC material used in it is of high quality. Looking for something great in your figure collection. Then, you should go for Muzan Kibutsuji Demon Series which is beautifully designed and nicely carved. The style and the colors used in it are so nice that attract the attention of the onlooker. Muzan is considered a brave person who wants to live eternal and in this regard, he kept on making lots of demons so that he may go into the sun. He’s slain many humans and made them his subordinates.

In this regard, Muzan Kibutsuji Demon Series is an exquisite figure with awesome colors. Muzan is displayed here in a standing position where he’s dressed in a three-piece suit and the combination of off-white pants and green coat gives an awesome look. He’s put one hand on his hat which shows that he is stylish and the red eyes are hidden under the hat which makes him look quite curious. The ringlets on both sides look amazing and the deep red eyes give him a captivating look. Its dimension is 6x6x8 inches and the PVC material used in it is of high quality. 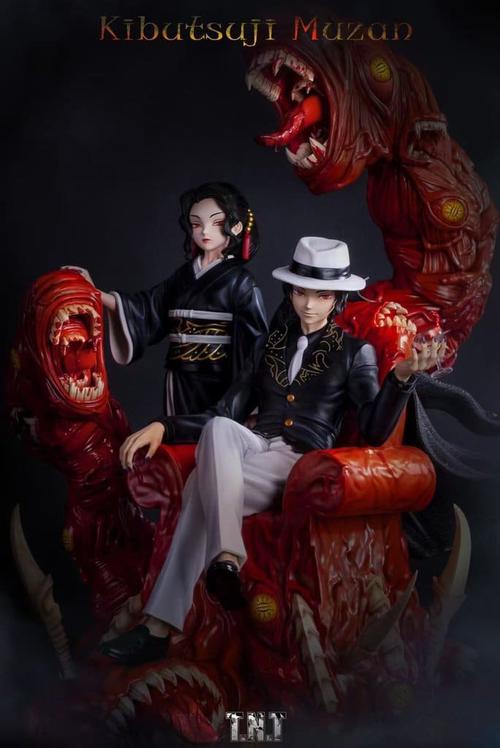 The scary figures are nice in style and give you a different look. In this regard, you should choose different figures such as TNT Studio Demon Slayer Demon King Kibutsuji Muzan 1/6 Scale Statue. The best thing about this figure is that it gives you an entirely different feeling as 2 characters are being introduced in it which looks amazing. As he hates death and feels as if it is only made for humans so, he inflicted humans a lot and kept on killing them.

Moreover, TNT Studio Demon Slayer Demon King Kibutsuji Muzan 1/6 Scale Statue is exquisitely designed and beautifully carved. Here Mozan is displayed in 2 postures and in both the characters he looks amazing. In one posture he’s dressed up as a lady who’s exquisitely dressed up in a traditional costume that looks amazing. In another posture, he’s displayed in a male costume who’s beautifully dressed up and the body-hugging coat looks amazing on him. With the hat on his head and the cunning smile looks like he is ready to rule. And the monster-shaped throne gives it a scary look. Its scale is 1/6 and the PVC material lasts longer. Looking for something which gives you an awesome feeling whenever you look at it. Then, you should try out the figure that is amazing such as Banpresto Demon Slayer Kimetsu No Yaiba World Collectable Figure Special - F Muzan Kibutsuji (black). You would love its articulation and the fine finishing will amaze you. Muzan was born as a still baby who is being told that he will die soon so different experiments from the doctor made him a demon who is so rigid. He killed many innocents on his path to becoming eternal and perfect.

Therefore, Banpresto Demon Slayer Kimetsu No Yaiba World Collectable Figure Special - F Muzan Kibutsuji (black) is a nice articulation and the perfection of this figure will surely attract you. Here Mozan is described as clenching his teeth which means that he’s stored a lot of anger in him which will only burst once he will get a chance to attack. His blue-tipped fingers seem to have a lot of power hidden in them and he can cast a spell on his opponent. Its dimension is 6x6x8 inches and the PVC material used in it is of a high quality that lasts longer.

To sum up, Mozan Kibustuji remains a brave person who wants to rule others, especially the humans’ whom he considers frail creatures. So, he shows wrath on others and inflicted them as much as possible to achieve his task. So, collecting these figures is fun and you will get a lot of knowledge that how a person turns into a demon and then how he becomes crazy for achieving his target. Don’t forget to look at the material and the company’s name whether it’s authorized or not.